Benchlife reports that new Skylake-X and Kaby Lake-X processors from Intel will launch during the second half of 2017; both architectures are supported by Basin Falls LGA Socket 2066 platform.

Although Skylake-X and Kaby Lake-X are based on different architectures, both will be supported by the new Basin Falls-X platform, and its LGA socket R4 2066. The new R4 socket contains 2066 pins, meaning that current CPUs from Intel will not be supported by a new platform.

Skylake-X should offer 6, 8 and 10 core CPUs, probably the new generation of Xeon processors; TDP rating should be 144W and the new CPUs will have 44 PCI-Express 3.0 lanes. On the other hand, the new Kaby Lake-X will contain only 4-core CPUs, meaning that Kaby Lake-X architecture will bring new i5 and i7 CPUs. Kaby Lake-X has a TDP rating of 112W, features up to 24 PCI-Express 3.0 lanes and is made in the 14nm production process. Smaller production process means more power, higher clocks, and higher power efficiency. It will be interesting to see what Intel has to offer, but for that, we’ll have to wait for the second part of 2017 when two new architectures are planned for release. It seems that Intel decided to push back from the original Q2 2017 launch.

Also, new Basin Falls-X platform will support quad channel memory on Skylake-X CPUs and dual-channel memory on Kaby Lake-X CPUs. Both Skylake-X and Kaby Lake-X will support memory speeds up to 2667 MHz. The platform will be on the market until 2020 when it should be replaced by a new LGA 2076 platform (Ice Lake-X). In addition to Skylake-X and Kaby Lake-X, Basin Falls-X should support the upcoming Cannonlake-X CPU family. The potential prices are unknown at the moment but are expected to be uncovered before the new CPUs launch in 2017. 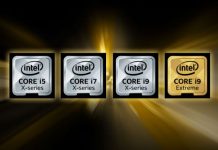