A new 16-core  microprocessor is in the market – we’re not joking. Intel has launched the latest and fastest microserver-based CPU, and the technology that made this possible is the use of 14-nm FinFETs that constitutes Intel’s “Broadwell”. The new processor is an addition to Intel’s Xeon D series of CPUs and is numbered as the Xeon-D 1571. The 14 nm process that it incorporates allows the 16-core chip to operate at a clocking speed of 1.3 GHz, with 24 MB of L3 Cache, and a low TDP of just 45 Watts. Interestingly, although the cores of the processor have doubled from 8 to 16 in the last two releases from the company, the sheer majesty of the Broadwell architecture has ensured that the TDP remains the same.

WCCftech mentions that Intel also plans to launch a sibling to 1571, to be known as 1587. This is supposed to be faster and it comes with higher clocking speeds and a resultant higher TDP of 65 Watts. Quite naturally, the processors are to be priced in the high-end zone at $1222 for the 1571 and higher for 1587. The architecture maintained by the processors is essentially the same as used in other high-end Xeon D CPU – supporting VT-X/VT-D, the TXT, VTX-2 and TSX Package, as well as RAS. The processors follow System on Chip logic, which does a better job and is more efficient than the typical two-chip solutions we have seen earlier. 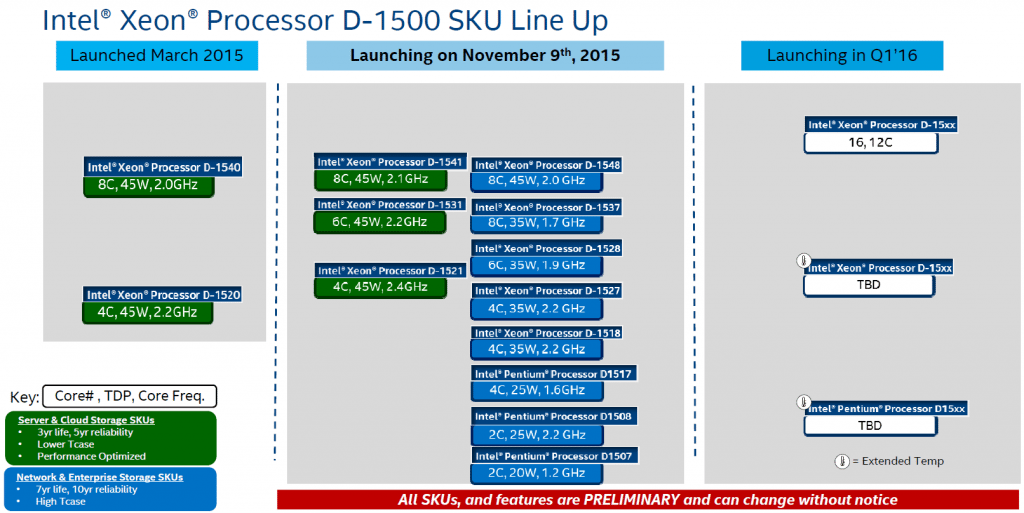 Other features that are involved with the processors involve DDR3 RAM that has a moderate bandwidth of 2133 MHz, a DDR3L RAM that has a bandwidth of 1600 MHz. Up to two DIMMs can be used with the system with a capacity of 64 GB (SODIMM) or 128 GB (RDIMM) for both Non-ECC and ECC types. Input/Output ports that are included include an Ethernet port supporting up to 10 Gbps speeds, USB 3.0 and 4.0 speeds and six HDD ports of SATA3.