Intel has been announcing many product families. Recently, the company launched monster CPUs to tackle AMD’s Ryzen 9 Threadripper. Intel has introduced the most powerful, most scalable desktop processors ever. The new Intel Core X-series processor family is the ultimate desktop platform, delivering “extreme mega-tasking power for today’s demanding enthusiasts and creatives”. Although we are seeing a great many Skylake based processor announcements,  Intel’s new Coffee Lake many not launch until next year.

Intel’s new Coffee Lake family of 6 and 4 core CPUs has been delayed until February 2018. It was expected that Intel would launch Coffee Lake at the end of this year. However, according to recent reports, Intel has delayed the launch till February 2018.  The next gen of products from Intel are mainly targeted at mainstream market and will feature Intel’s 6-core and quad-core Coffee Lake CPUs and Z370 chipset. Intel is also expected to introduce a Kaby Lake refresh this year for its 8th generation processors. These are expected to deliver up to 30% better performance for ultrabooks.

For the uninitiated, Coffee Lake is Intel’s codename for second 14nm process refinement following both Skylake and Kaby Lake. Coffee Lake processors are expected to offer a 30% performance gain over Kaby Lake and offer support for DDR4-2400MHz memory (native) in dual channel mode.

However, over the next four quarters, we can get to see high-end Core X series (introduced last week) that includes Skylake X, Kaby Lake X CPUs as well as X299 chipset. 4-core Kaby Lake X i5 7640X and i7 7740X CPUs as well as 12, 8 and 6-core i9 and i7 Skylake X series CPUs. Delayed launch is expected for 18, 16 and 14 core variants. Intel Core X-series processors feature the updated Intel Turbo Boost Max Technology 3.0, which improves single and dual core performance. Intel claims the Core X-series processor family provides the ideal platform for editing and rendering high-resolution 4K and VR video and effects, with support for fast video transcode, image stabilization, 3D effects rendering and animation. 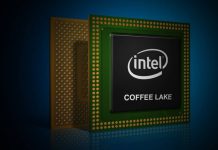