It looks like Intel is far from being impressed with what arch rival AMD managed to accomplish with its Zen architecture. At least, that’s what the company’s public response to AMD’s newly launched EPYC processors (codenamed: Naples) suggests.

In an official slide that Intel put together as part of a presentation promoting its Xeon processors, Intel criticized Naples as just a “glued-together” solution.

Expectedly, the not-quite-flattering words from Intel caught heat by many observers who believe that this could very well mark the beginning of a war of words between the two chip makers. Of course, for that AMD will have to respond first. Nonetheless, the harsh words Intel chose to describe its opponent’s product could be a testimony to its growing nervousness about AMD’s Zen architecture.

Here’s one of the slides criticising Naples: 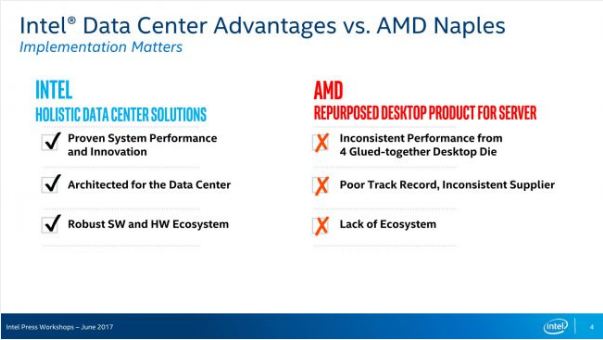 Note that while EPYC processors do, in fact, consist of four Zen-based dies under a single package, AMD’s approach to the architecture is far more complicated and technologically sophisticated than Intel would have you believe.

Also, judging by the feedback so far from buyers, as well as analysts, it seems AMD’s solution is working just fine. In fact, many claim that the company’s modular approach comes with benefits on multiple fronts including better yields.

Meanwhile, in another slide, Intel claims that because AMD doesn’t have an ecosystem in place, buyers might as well “expect software optimization needed for Naples, just like Ryzen”.  Not everyone seems convinced by Intel’s AMD bashing, though!

“So AMD’s server platform will require optimizations as well because Ryzen did, for incomparably different workloads? History does inform the future, but not to the extent that Intel is putting it here to, certainly. Putting things in the same perspective, is Intel saying that their Xeon ecosystem sees gaming-specific optimizations?,” TechPowerUp writes.

Of course, AMD’s Naples has its fair share of drawbacks just like any other products. However, the growing consensus is that the manner in which Intel went about its criticism was somewhat misleading and over-the-top.