The Windows 10 Technical Preview was released last week, but only for 6 devices – Lumia 630, Lumia 635, Lumia 636, Lumia 638, Lumia 730, and Lumia 830. If you are not an owner of these selected devices, you might want to thanks to XDA-Developers, those are providing you with a installation file named ‘wpinsiderhack’ for any Lumia Mobile.

Few Lumia users have already installed with the hack file, reported that Lumia 930, Lumia 1320, and Lumia 720 are working fine without any errors. But sadly, Lumia 520, Lumia 535, and Lumia 920 are not working accurately and reporting issues with the update. 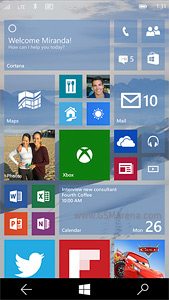 If you don’t want to wait anymore, you can update your secondary Lumia phone to Windows 10. Do remember, the update is not an official release and could damage your device in friction of seconds.

You can head to XDA developers’s forum following source link for more information.

Note: Your device is on risk, we don’t advise you to update your phone with unofficial release.