Yes, this news isn’t bogus, it is actually possible to chat with your friends owning iPhone, but for that to happen you still have to own Mac for the app to function. PieMessage basically uses OS X device as a hub that routes messages received on iMessage to your Android phone. It works fine, at least if (and when) Apple decides to shut it down, like they did with most similar third-party tweaks. 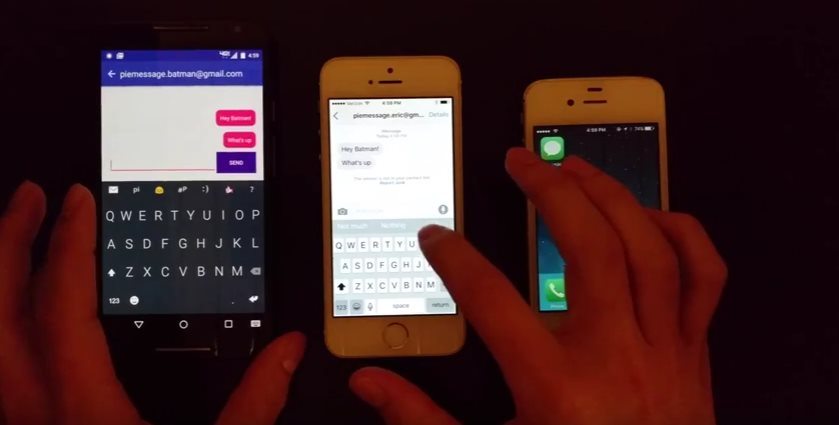 Eric Chee, a man behind PieMessage app said that the project is still a “super alpha prototype,” but it works perfectly at the moment. You can chat with your iMessage contacts, and in the future new features like group messages or video and photo messages could also be included. But, for now, you can only receive group messages, there is no way of sending them.

The full explanation of how the app works can be found in a post published on GitHub, but in short PieMessage works like this:

“The Android client connects to a socket that whose IP address is the OSX device that is running the JWS (Java Web Server) and OSX Client. It then sends JSON messages to the JWS using that socket. It also receives JSON to show in the list of any new incoming iMessages.”

The best thing about the app is that a Windows (and Windows Mobile) versions could also see the light of day because making a client for Windows is possible, but we’ll see will it actually be made, especially if Apple decides to ban the app, which is highly possible. All in all, you’ll have to use a Mac to serve as a router, meaning that without a Mac, PieMessage will not work. But if you have it, you can try the app out and check this cool new Android feature yourself.