In addition to the iconic rings , another striking feature of Saturn is a massive hexagon located on the north pole of the planet. Discovered in the mid-80s, these interesting training measures incredible 30,000 km in diameter and extends over 100 kilometers from the atmosphere to the surface of the planet.

According to NASA , which keeps the hexagon in this format is still a mystery to scientists. But it is known that there is an air current that runs along its boundaries with speeds of over 320 kilometers per hour and that each point of the hexagon appears to rotate about the center itself almost at the same pace that Saturn rotates on its axis.

In addition, according to Bec Crew, from Science Alert portal, based on size and their movements, the scientists concluded that the hexagon is a giant nebulous pattern generated by a huge perpetual hurricane for decades – or even centuries – is active in the north pole of the planet.

Well, dear reader, this huge – mysterious and overactive – Saturn area simply changed colour, but nobody knows for sure why. According to NASA, in November 2012, the Cassini spacecraft captured images of the famous hexagon and the records, it appeared like this: 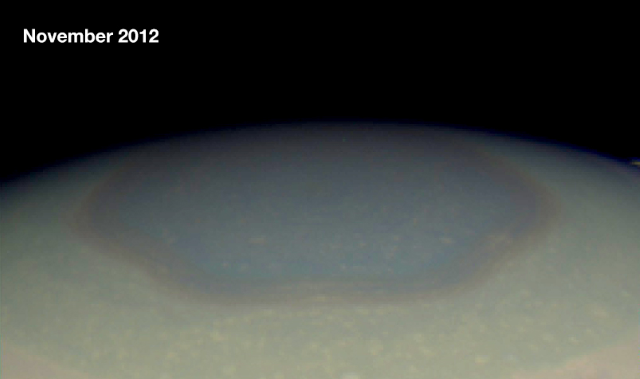 But the equipment returned to capture images of the hexagon in September this year, and this time, the records showed something different.

Perhaps the hexagon is functioning as a kind of barrier, preventing the mist particles produced out of this training enter it. This theory was proposed after the NASA researchers analyze the hexagon and realize that there were differences in the types of particulate matter both in its exterior and inside.

According to NASA, the best explanation they could find for the colour change is that it may be related to the seasons of the Saturnian year. Moreover, as each year in Saturn corresponds to 29 years on Earth, the seasons change occurs much less frequently than here. More precisely, once every seven years (ground), more or less.

As explained by the space agency, in May 2017, the North Pole Saturnian will host the summer solstice, and scientists suspect that the colour variation from blue to gold is an effect of the increase in the production of photochemical mists in the atmosphere in the region the planet.

According to NASA, between November 1995 and August 2009, during which the pole remained without receiving sunlight – and that corresponded to the polar winter – its atmosphere was free from particles produced by photochemical reactions, and the hexagon became bluish.

However, after 2009 equinox, this same region has to receive the solar rays constantly, resulting in the production of aerosols (powdery particles) within the hexagon around the north pole, so that the atmosphere seem more foggy and gold – due to the increased number of particles in suspension.