Huawei Mate S or Mate 8 which will be unveiled on September 2nd, has given a debut appearance on the Oppomart’s website. Oppomart is a leading etailer where the Huawei Mate S is listed with a tag of US$ 599, however there are chances that the price may be somewhat lesser than what is currently being see at the webpage. In the listing we can clearly see the specifications of the device which says it has a 5.7-inch screen with 1920x1080p resolution which turns out to be a 386ppi pixel density. 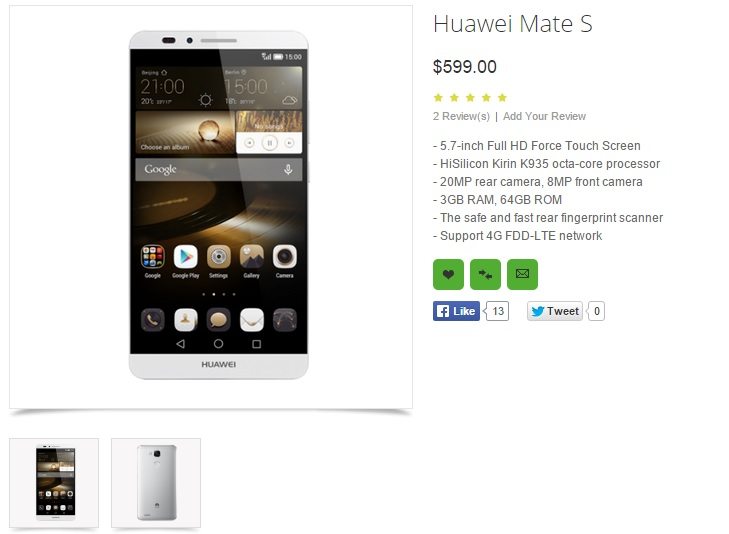 Interestingly, the specifications of the Huawei Mate S reveals the Force Touch feature which will soon be also adorning the Apple iPhone 6s and iPhone 6s Plus. This feature will help the device’s screen to recognize a light tab and a heavier tap. Thus the user may have a two different features running from same location of tap but with the difference of touch.

Huawei Mate S will be powered by in-house Kirin 935 chipset with an octa-core CPU and Mali-T628 GPU. Housing a 3GB of LPDDR4 RAM, it has 64 GB on-board storage which can be expanded through microSD card. The device features a 20MP rear camera with an 8MP front shooter and a whooping 4100mAh battery which can run device for long hours. Running on Android 5.1 it will have a Emotion 3.1 UI on top of it. Weighing at 185 grams and 7.9mm thick it supports 4G LTE connectivity.

This listing on Oppomart is likely to make a place in history forever as Huawei Mate S can be the first phone to feature Force Touch. However with almost 9 days remaining for the listing to become live, it will be interesting to see whether the ZTE Axon Mini will shatter all the Huawei dreams for being the first phone or not. But it now pretty much sure that it will not be Apple’s iPhone 6s and 6s Plus, as they are expected to be unveiled on 9th September.