Huawei recently announced the Mate 9, the company’s newest flagship device. The device is powered by the new Kirin 960 chipset; it features an all metal body, dual camera setup, a huge 4000 mAh battery, and Android Nougat. The Mate 9 came a bit late, but the late arrival placed the model as the most powerful Android flagship of 2016. Let’s see how it compares to the Galaxy S7 and the iPhone 7. 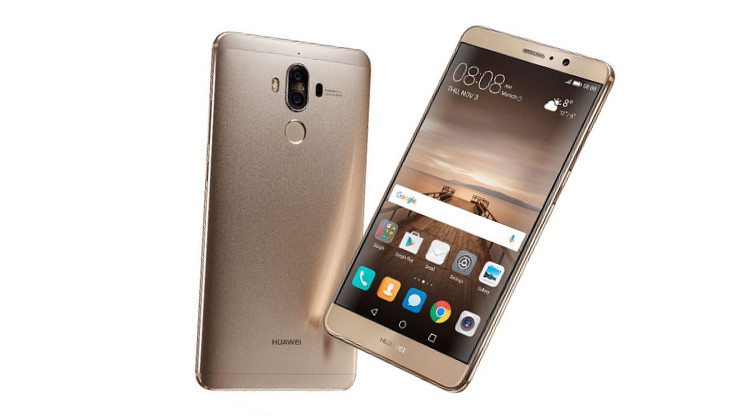 The Huawei Mate 9 looks quite attractive. There are no visible antenna bands on the back, the front features a huge 5.9-inch screen with almost invisible bezels, and on the back, you can find the camera and a fingerprint scanner placed in the upper middle part, one above the other. The galaxy S7 also look pretty nice, with a shiny metal chassis, very thin bezels and the back without antenna bands. The iPhone 7 features a design that’s already dated since it has been featured on the iPhone 6 and iPhone 6+. The phone looks okay, but it suffers from repetitiveness. We hope Apple will introduce massive design changes with the iPhone 8.

Kirin 960 (4×2.4 GHz Cortex-A73 & 4×1.8 GHz Cortex-A53 coupled with Mali-G71 MP8) powering the Mate 9 really is a beast. Reports state that it has almost the same raw power as the Snapdragon 821, with Huawei finally including a powerful GPU to the formula, making the Mate 9 an excellent choice for gaming. The phone also has 4 GB of RAM and 64 GB of expandable built-in storage. A mix offering supreme performance, no matter what you throw at it.

The Galaxy S7 features Snapdragon 820 (2×2.15 GHz Kryo & 2×1.6 GHz Kryo along with Adreno 530) or Exynos 8890 Octa (4×2.3 GHz Mongoose & 4×1.6 GHz Cortex-A53 and Mali-T880 MP12 GPU), depending on whether it’s the international version (Exynos) or the US version (Snapdragon). Both Exynos and Snapdragon versions are rather powerful, there aren’t visible performance differences between two versions. The phone packs 4GB of RAM and a choice between 32GB and 64GB of expandable internal storage.

The iPhone 7 comes equipped with Apple A10 Fusion chipset (Quad-core 2.23 GHz, six core graphics) that is the new record holder in most benchmark apps. The phone also has 2 gigs of RAM (more than enough for highly optimized iOS) and a choice between 32/128/256GB of internal storage. The storage can’t be expanded, as is the case with all previous iPhone models. All three devices are proper powerhouses, ready to chew through anything.

The Mate 9 is equipped with a huge 5.9-inch, 1080p, IPS LCD screen, offering natural colors and wide viewing angles. Even though the resolution is “only” 1080 x 1920 pixels, the sharpness is more than solid at 373 ppi pixel density, more than the iPhone 7 has. With the screen this big, any kind of usage will be a joy. Movies, games, books, web surfing, everything is better on a 5.9-inch behemoth display the Mate 9 features.

The Galaxy S7 has a 5.1-inch, 1440p, Super AMOLED display, featuring highly saturated colors and deep blacks. The sharpness is extremely high (577 ppi pixel density) and the display is large enough for most tasks to perform rather well.

The iPhone 7 has a 4.7, IPS LCD display with the resolution of 750 x 1334 pixels. Screen density (326 ppi pixel density) leaves a lot to be desired, but pixelation shouldn’t be easily spotted. The screen is okay; it’s a bit too nimble, but enough for watching videos or surfing the web.

All three models have excellent cameras; if you like to take lots of photos you won’t make a mistake if picking up either of the three.

The Mate 9 comes with a huge 4000 mAh battery, offering at least two straight days of usage. The Galaxy S7 features a 3000 mAh battery, not a huge power bank, but enough for at least one whole day of usage. The iPhone 7 comes with a modest 1960 mAh battery; if you’re a power user, don’t expect for the battery to last you through a whole day. Both Mate 9 and the Galaxy S7 support fast battery charging; all three models have a fingerprint sensor.  The Galaxy S7 is IP68 certified (dust proof and water resistant over 1.5 meter and 30 minutes) while the iPhone 7 is IP67 certified (dust and water resistant, water-resistant up to 1 meter and 30 minutes).

The iPhone runs under iOS 10, the Mate 9 comes with Android Nougat coated with EMUI 5.0, while the Galaxy S7 runs under Android Marshmallow, but the Nougat upgrade is just around the corner.

The iPhone 7 is the phone for iOS lovers. If you love both iOS and large screens, then go for the iPhone 7 Plus. Now, the Mate 9 is a dream phone of all huge screen lovers. You’ll get a huge and bright screen, a premium metal chassis, excellent camera, huge battery and the latest Android OS. The Galaxy S7 is the right choice for users wanting a premium metal body, an excellent camera, powerful hardware, but at the same time wanting to have a screen that’s not too large.