The Chinese consumer electronics firm Huawei has had various launches recently, the most recent being the Huawei Mate S with a Kirin 935 chipset and 5.5-inch AMOLED screen. Huawei’s Nexus 6P which hit the markets just a few months ago featuring a 5.7-inch QHD display was too a big success. Huawei is not yet finished for 2015 and is now rolling out its next product, the Mate 8 for sales. 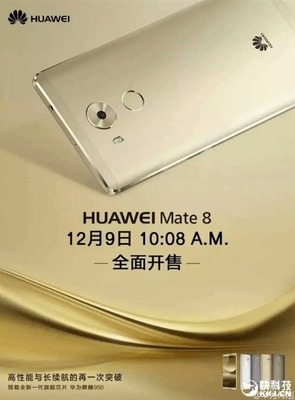 Unveiled last month, the Huawei Mate 8 has been announced for launch on 9 December. It features a 6-inch LCD display at 1080 x 1920 resolution. It has under its hood a Kirin 950 chipset and is available in 3GB RAM & 32GB inbuilt storage or in 4GB RAM & 64GB inbuilt storage, exclusive champagne variant. The device has a 16MP rear camera with a Sony IMX298 OIS sensor and an 8MP front snapper with a Sony IMX179 sensor. It has a battery capacity of 4,000mAh which should keep the phone running for a whole day. The Mate 8  scored a whopping 89,360 on AnTuTu when it was unveiled a few weeks ago.

The Huawei Mate 8 will open up for sales on 9th December. The standard 3GB RAM model will cost around $470, while the exclusive and expensive Champagne edition is priced at around $1075.