MobiPicker
News Huawei Mate 8 Scores Massive 89,630 Points On AnTuTu
Share on Facebook
Tweet on Twitter
Deal Alert: 49% Off on ExpressVPN
Touted as #1 VPN in the world, ExpressVPN is now offering 49% off & an additional 3-months of service on its annual plans.

Since Huawei announced their much-hyped Mate S, people have been wondering whether they’ll release their Mate 8 phablet too. So, the company’ CEO confirmed that the Mate 8 is coming indeed. We’ve had multiple leaks and teasers related to this expected device, and the company released an image on Weibo teasing the release of Mate 8, which will probably take place on November 26. After making its appearance on GFXBench, the device has been benchmarked on AnTuTu too!

It’s expected that the Huawei Mate 8 will be a high-end phablet just like its predecessors. And it has to live up to some serious expectations, because Ascend Mate 7 is already quite spectacular. Even though we have no clear whatsoever how the device will look like in real, it’s obvious that it will make some serious changes in the market.

So getting back to our topic, the Mate 8 with the model number NXT-AL10 appeared on AnTuTu with an impressive score of 89,630, that being the highest score on AnTuTu so far. The device will be powered by HiSilicon Kirin 950 64-bit octa-core SoC (announced only a couple of days ago in China). According to the leaks, the device will supposedly have a 1080p or QHD display (5.7 or 6-inch one), with 3 or 4GB RAM (it’s possible that we will have two variants). 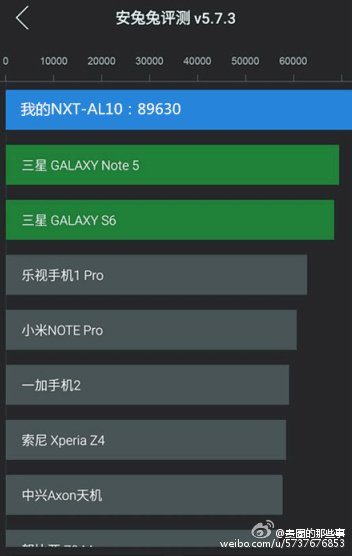 Design-wise, it’s supposed that the device will be wearing a metallic cover. We also expect a fingerprint scanner on the back, of course, and “Force Touch” appears in several leaks. Mate S is already having Force Touch, so it’s quite possible that the Mate 8 will be getting it too. Other rumored features include a 21MP rear camera and an 8MP front one. The phone will be available in two internal storage variants, 32GB and 64GB, while it’s possible that there will be a 128GB one as well.

Now the rumored price of Mate 8 doesn’t sound that expensive, does it?