HTC recently launched a new smartphone, One A9, with the combination of high-end and mid-ranged specs, to fill the loss caused by the One M9. Now another high-end smartphone from the company, named as One X9, has been spotted on Weibo, and is rumored to come with a model number HTC E56. According to leak, the phone may cost RMB 2,999 (approx. $470). 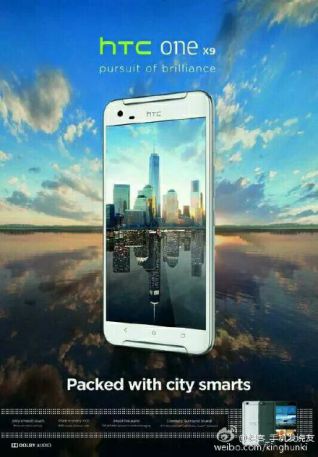 When it comes to specifications, the phone will be powered by the MediaTek Helio X20 or Qualcomm’s Snapdragon 820 chipset, coupled with 4GB of RAM and 64/128GB of internal storage. A less storage variant is also expected to cut down the price.

The HTC One X9 might feature a 2K display (size is unknown), a 23-megapixel primary camera on the back and a 4-megapixel front-facing shooter for selfies. It is built with a metal body and features dual HTC BoomSound speakers on the front. A 3500mAh battery supplies power to the handset.

It is worth mentioning that the leak is coming from an unofficial source, so take it with a grain of salt until HTC confirms the existence.