HTC believes in not wasting words and letters in naming its phones, which is why it creates a name and then just uses different symbols and letters to differentiate various variants of its phones. The One M9, M9+, M9+ Supreme Camera, etc. easily confuse the buyer with their hardly-different naming, which tells us how flawed HTC’s product strategy is. Well, the HTC One M9e has been launched in Tmall, China, and carries over the One M9’s name with just an ‘e’ to differentiate things. 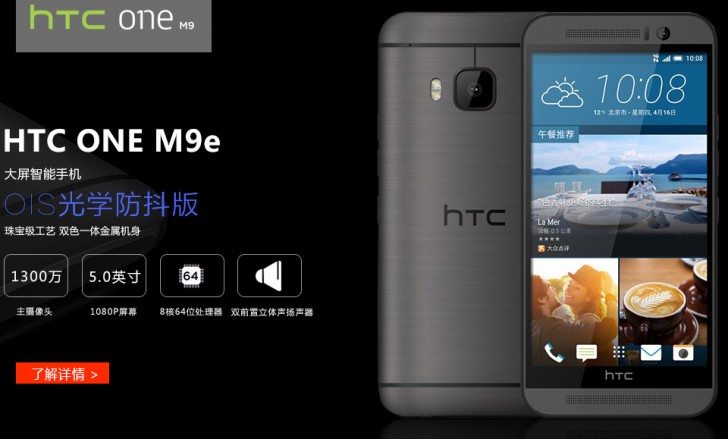 To make things simpler, the HTC One M9e is basically the One M9 with the One A9‘s camera in it. Sadly enough, that’s where the similarities end and the One M9e does not get the A9’s beautiful design, though HTC has promised to bring the A9 design to Desire and One M phones. Talking about specifications, the HTC One M9e gets the MT6795T Helio X10 chipset used in the One M9+. The M9e gets only 2GB of RAM alongside 16GB of internal storage.

The HTC One M9e boasts of a 13MP camera at the rear with OIS, and the camera unit has been stripped right out of the A9. Unfortunately, there’s no 4K video recording and you need to make do with 1080p. The phone does come with an UltraPixel selfie camera. The M9e gets a 5-inch Full HD screen and runs Android 5.0 Lollipop with HTC Sense on top of it. Featuring an aluminum unibody, the One M9e is a single-SIM phone and costs CNY 2,700 (€385/$425 approx).