There is news on the horizon and what we hear is that a major software update is in the pipeline for HTC One M9. This is from the one of the most creative companies in the mobile arena and it is none other than HTC. This smooth move was orchestrated in Mobile World Congress in March. The model went on sale a few weeks later. According to HTC ROM developer LlabTooFeR there are some pretty interesting new features. 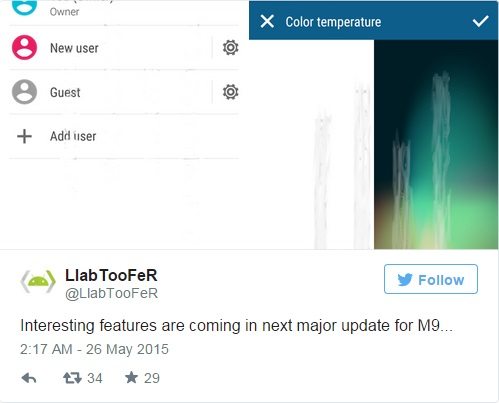 Yesterday in a tweet to its loyal fan base, LlabTooFeR revealed that the HTC One M9 update will unlock Guest Mode – a slick feature that friends who want to sneak a peek in your phone. Now you can hand over your device without worrying about your personal stuff being as revealed. HTC One M9 update will bring in one more new feature which is the ability to control the screen colour temperature.

Now everybody is up on the edge guessing what else the update is bringing for them in terms of UI and other cool features. This is a coincidence that the news comes exactly a month as there were reports that the Samsung Galaxy S6 and S6 Edge will bring Guest Mode in new 5.1 update. This update is expected to hit the market next month sooner.