Carrier-branded HTC One M9 in Canada will not take a longer time to receive Android 6.0 Marshmallow version. Mo Versi, VP of Product management at HTC, has confirmed the roll-out schedule for the smartphone on carriers in Canada.

Responding to a query on Twitter, Mo Versi said that the HTC One M9 will receive the Android 6.0 update early next year. Going by the tweet, the smartphone will initially be updated with Android 6.0 and users are to wait for some more time to receive Android 6.0.1, which comes with the expanded emoji set. 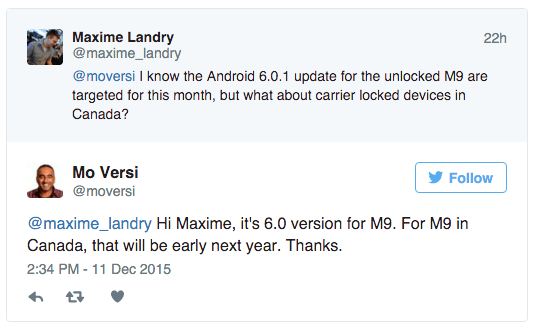 It is worth noting that Telus (Canadian carrier) updated its software roll-out schedule back in October, which revealed that the HTC One M9 on the carrier will start receiving the Marshmallow update on January 21st. Based on HTC’s previous history of updating its smartphones and comments by Mo Versi, it is highly likely that the other carriers will also start updating their One M9 smartphone around the same date.

The HTC One M8 on Telus will also start receiving Android Marshmallow update on December 17th, which is now less than a week away.