Support and updates for old flagships has always been an issue with OEM’s and while some decide to ditch their old models when the next one arrives, HTC maintains it’s not one of them. Mo Versi confirmed today that the HTC One M8 would be in the update loop when Android M arrives! The device currently runs Android Lollipop having been updated earlier this year. 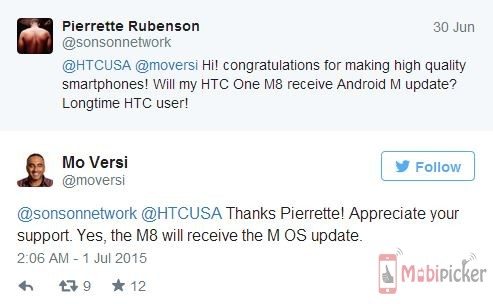 How soon will the update to Android M be? We don’t know that yet. History indicates that when Google released the Lollipop source code on november 3rd last year, HTC announced an update for the device which was released three month later.The update hit both the unlocked and Google Edition phones while rolling it out to the phones on carriers proved to be time consuming and the update reached One M8 users through careers in late spring.

We can only assume that a similar schedule will be followed this time around and hope that HTC takes the minimum time to release a perfect update of Android M to One M8 Users once it arrives later this year.