The upcoming HTC One A9 has just visited the Geekbench website, which confirmed that the new flagship phone will be powered by the MediaTek MT6797 chipset. This chipset features the deca-core processor. It uses a Tri-Cluster layout with dual 2.5GHz Cortex-A72 cores for heavy tasks, four 2GHz Cortex-A53 cores for medium work, and four 1.4GHz Cortex-A53 cores for light duties. The MT6797 consumes 30% less power compared to other high-end chipsets, thanks to its 20nm technology.

As recorded on Geekbench, the chipset managed to score an impressive 1835 points one the single-core and 5884 points on the multi-core test. This surpasses the 5375 scored by the Samsung Exynos 7420 chipset, which is used in the Galaxy S6 and the Galaxy  S6 edge. 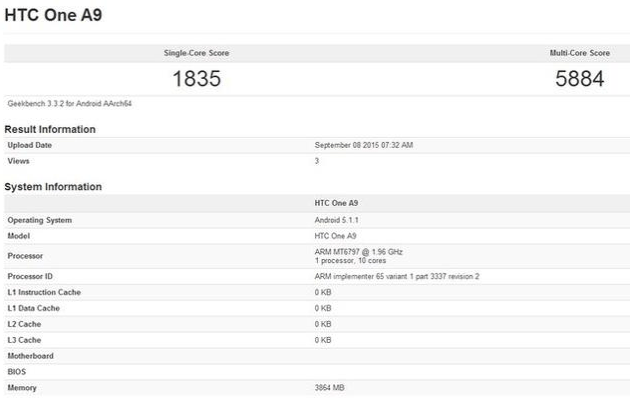 Supported by Mali-T880 Graphics processor, the MT6797 ought to fuel an interesting fight between Qualcomm and MediaTek. As for HTC, the One A9 could be the handset that will wipe out the memory of the HTC One M9. According to benchmark tests, the smartphone will be the first from HTC to have a 4GB RAM. While not all users look at things like RAM, CPUs and standard evaluations, strong support from some smartphone fanatics can help create a base that HTC can use to rebuild the reputation it once had.

The HTC One A9 a.k.a HTC Aero will be unveiled in an event in Japan on September 29.