The HTC One A9 aka Aero is responsible for making many HTC fans restless, with so many leaks and rumors coming out every other day. We were earlier of the opinion that the HTC One A9 will carry high-end specs, but the phone was recently run through the AnTuTu benchmark test and the results are not so affirming. This doesn’t mean that the phone will be an under-performer. However, it surely does not classify as a next-generation high-end device.

According to the benchmark test results shared on Weibo, the HTC One A9 comes with a 5-inch 1080 x 1920 display with a pixel density of 441ppi. Qualcomm’s Snapdragon 620 chip is powering the phone with an octa-core CPU that is based on the big.LITTLE architecture. There’s also an Adreno 405 GPU for better graphics. 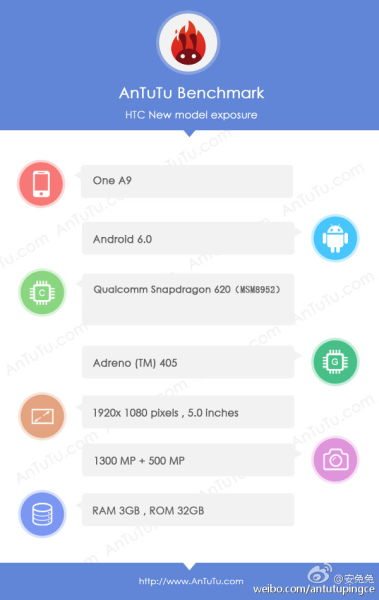 The HTC One A9 apparently boasts of a good 3GB of RAM and 32GB of internal storage. On the camera front, there’s a 13MP sensor at the back and a 5MP one at the front. As for the benchmark scores, the One A9 was able to manage a nice 40,698 on the AnTuTu test, but that score is nowhere near a high-end powerful smartphone. 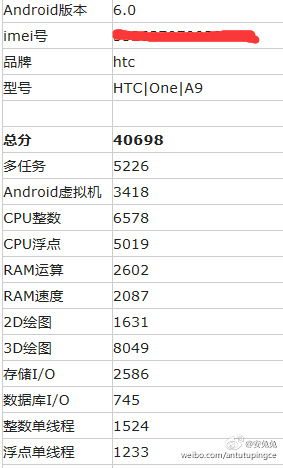 So those who were expecting the HTC One A9 to be a flagship phone will obviously be disappointed. However, it can surely be a nice device for those HTC fans with a not-so-high budget. There’s also a rumor about a 6-incher HTC O2 with a Snapdragon 820 chipset launching next year. But nothing is official as of now and we need to wait some time for stronger evidences.