HTC‘s upcoming flagship device has kept everyone at the edge of the seat, and the leaks and rumors have not stopped pouring in. In case you are one of those HTC fans who are eagerly awaiting the HTC One A9 aka Aero, there is a very strong speculation about the phone that is running over the internet today. 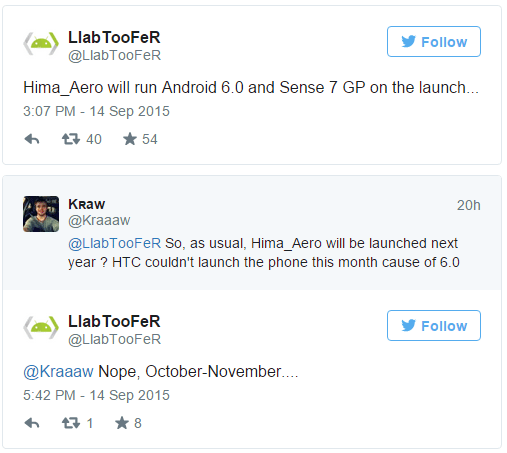 LlabTooFeR is a very frequent and trusted source for HTC leaks. The leaker has tweeted about the HTC One A9 saying that when the smartphone is launched, it will be running Android 6.0 Marshmallow out of the box. It is obvious that it will carry HTC’s custom Sense user interface on the top, and we expect it to be the Sense 7.0. This news is really great, as it would be wonderful to watch the latest HTC phone running the latest Android version and keeping up with its competitors. As far as the launch date is concerned, the HTC One A9 “Aero” is reported to be arriving around October or November.

There hasn’t been any strong rumor or speculation regarding the hardware specifications of the HTC One A9, but a leaked image of the alleged HTC One A9 leaked out last month and suggests that the phone will come with a screen with 2.5D curved glass edges. As of now, the One A9 coming with Android 6.0 Marshmallow is a big news in itself, as it will mean that those who buy the HTC One A9 just after its launch will get the privilege of having Android Marshmallow before most of the Android users in the world.