HTC is all set to launch its 2016 flagship device HTC 10 at its launch event scheduled for April 12. We already know about most of the specs and configurations of the upcoming HTC 10, thanks to the various leaks and benchmark reports over the last couple of months. If the latest reports and rumours are to be believed, the HTC 10 will have a compact or mini version as well. This mini sibling of the upcoming flagship will be known as the HTC 10 Mini.

The HTC 10 Mini will sport a 4.7-inch display (most probably FHD) and will be powered by the Qualcomm Snapdragon 823 chipset coupled with 4GB of RAM. 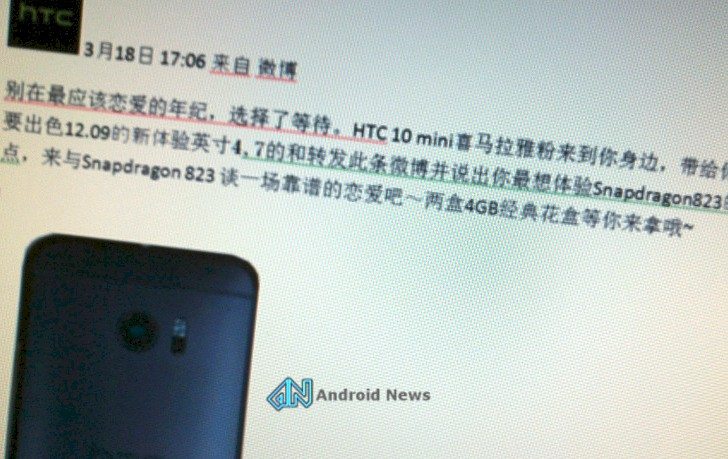 The Qualcomm Snapdragon 823 chipset has the same quad-core Kryo CPUs as the Snapdragon 820 chipset, albeit with a higher clock rate. Rumours also suggest that the Xiaomi Mi Note 2, which is Xiaomi’s upcoming phablet will also be powered by the same chipset.

The HTC 10 Mini will most probably be unveiled around September this year. We don’t have much information on this device yet, but we’re sure that more information regarding this upcoming HTC device will surface soon.

Till then, stay tuned and do leave your comments below.