Facebook Messenger for Desktop, iOS, and Android got updated on Thursday and 1500 new emoji were added. These new changes bring more skin tone options for human emojis and also add female emojis like runners and police officers. Many people will like this new style funky and freestyle. But of course, not everyone likes this new update, and many people do not want to use the new Messenger emoji at all. 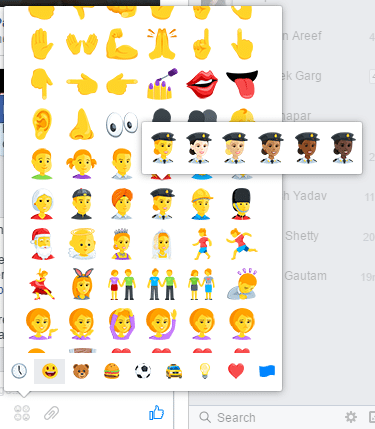 On the criticizing part for the new update, these emojis look less like emoijis and more like unfinished portraits. A lot of users are venting out their anger on various social media sites saying that they want the old emojis back as there was nothing wrong with them. Thankfully, Facebook has given us the choice to disable the new emoji as and when we want on our iOS and Android devices. Do note that you can turn off the new emoji in Facebook Messenger on iOS and Android, but cannot do so on desktop computers.

How To Turn Off New Facebook Messenger Emoticon Emoji

Please note that this process is applicable for both iOS and Android only. A lot of Android users have not been able to disable the new emoji, probably because of bugs. If it is a problem from developer-side, Facebook will release a fix for it soon in the next update. It is possible that Facebook has already fixed that, so chances of you getting that error is almost nil. Follow the below-given steps to disable the new emoji in Facebook.

Comment below if you are not able to turn the new emoji off.