Guerilla Games have just released another New update for the PlayStation 4 exclusive title Horizon Zero Dawn. The Update 1.04 fixes a lot of in-game bugs from the main quests, Sidequests, and the gameplay. 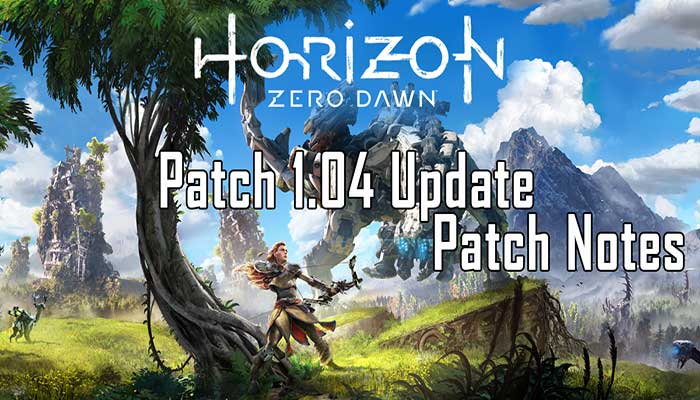 One of the most annoying bugs in the game was when Aloy gets stuck in her sliding animations. Thanks to the new update, this issue is now resolved along with tons of others. The Music stopping issue is also resolved and you won’t face any delays in a long run of music ever again.

“We’re pleased to announce that Patch 1.04 for Horizon Zero Dawn has been released today. This Patch fixes a number of progression and technical issues, detailed below. Please be aware that this list may contain several spoilers.”

Following is the full list of Update Patch 1.04 Patch Notes

Side Quests and Activities

Although a lot of issues are resolved with this new Patch for Horizon Zero Dawn, there are some issues that this patch never resolved. For example, the issue with all the outfit stats is doubled as compared to the time before the patch was released. Stats are not doubling up at all. This clearly goes against what the UL statement describes at PlayStation Blog.

“This Issue is being looked into currently and we shall try to address it as soon as possible. We Apologize for the inconvenience.”

Hopefully the new Patch Update 1.04 will help improve the gameplay of Horizon Zero Dawn. This will also be helping all those players who have been facing these issues. A big hand goes to Guerilla Games for timely addressing the issue and providing with the solutions. After all, Horizon Zero Dawn is our favorite game and we’ll never want to face any of the previous issues lurking in the game again.