Huawei has officially launched its Honor 7 smartphone in India and has priced the 16GB variant of the phone at Rs. 22,999. Interested buyers can buy the phone from Flipkart starting 15th October in Fantasy Solver and Mystery Gray colors. As of now, there’s now news regarding the possible launch of the 32GB and 64GB variants of the phone in India.

Talking about specs, the Huawei Honor 7 gets an aluminium alloy design and features a 5.2-inch Full-HD display with 423ppi of pixel density. Under the hood is Huawei’s own 64-bit Kirin 935 octa-core CPU coupled with Mali-T628 GPU and 3GB of RAM. The 16GB internal storage can be expanded up to 128GB via the microSD card slot. 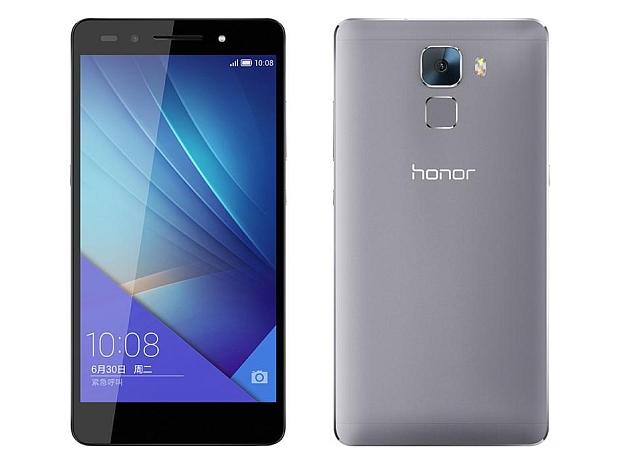 The Honor 7 ships with a high-end 20-megapixel Sony sensor at the rear with dual-LED flash to make way for excellent shots. There’s an 8MP front wide angle camera with a front LED flash module for perfect selfies in any light conditions.  Beneath the rear camera unit sits a fingerprint sensor for enhanced security. There’s a smart hardware key in the phone that opens up specific apps depending on how long the key is pressed for.

Connectivity features in the Honor 7 include NFC, Wi-Fi, Bluetooth 4.1, and 4G LTE. A 3100mAh battery keeps the phone running, and the quick charging feature charges the phone completely in just 1 hour 25 minutes, while the phone gets charged up to 50% in just 30 minutes. The phone also gets a reverse charging feature which allows you to charge the Honor 7 via other smartphones. The phone currently runs Android 5.0 Lollipop with EMUI 3.1 on top of it, and will receive the Android 6.0 Marshmallow update in February 2016.