In what could be termed as arguably one of the most remarkable comebacks by any company in the history of PC gaming, AMD unveiled its widely anticipated Vega GPU last week at CES 2017. As you know, the widely celebrated event was soon followed up by the chip giant presenting an overview of the Vega architecture that revealed some of the key new features and technologies in it.

Now, barely a week into the events that brought smiles to AMD loyalists all over and we are already coming across more intriguing details that are sure to add to the aura surrounding Vega. The most significant among these include its unique architecture and High Bandwidth Cache.

Both demos included triple-A gaming titles — CD Project Red’s The Witcher 3 and Bethesda Game Studio’s Fallout 4. Those familiar with these titles probably know and appreciate the high-level of optimization the developers did to retain the memory utilization footprint at its minimal. 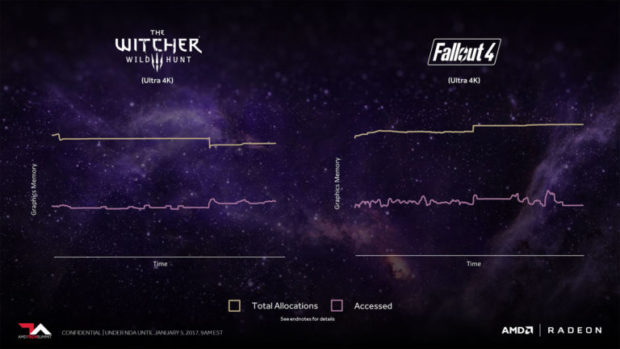 Apparently, the folks over at RTG figured that majority of the recent titles, including the aforementioned two, are optimized in such a way that they often use only around half the memory allocated.

Raja Koduri, Chief Architect at RTG, explained this by citing the case of old GPU architectures that practically compelled game developers to allocate more memory than needed to avoid scenarios wherein the gameplay could be made to swap in data from outside the graphics memory. Simply put, the shortcomings in older-generation GPU architectures were such that swapping data in and out of the frame-buffer was rendered a rather expensive business in terms of latency and overall performance.

In order to avoid such shortcomings, RTG had to make Vega smart enough to be able to identify the useful data beforehand so it can be loaded into the cache (while leaving out the unnecessary packets). Judging by what we have known so far about the new architecture, it seems the mission was accomplished as Vega not only can cut the memory allocation to games in half without leaving an adverse impact on the gameplay, but it also makes things like alt-tabbing out of games much faster. This is possible because the new architecture doesn’t cause frame-buffer to clogged up with wasteful data allocations.

So, this basically means that with Vega 10, your 8GB graphics card will give you an output similar to that offered by a 16GB graphics card powered by previous-generation GPU architecture.