Hearthstone has released its latest patch in preparation of its new expansion, Whispers of the Old Gods, which will come out on April 26. This patch mostly features some changes to cards from the basic set so they can be played in the new format called standard. Standard is a Hearthstone format where only cards from the latest set will be legal. Don’t worry though as your older cards will still have value as a format with all the cards ever made, called Wild, will still be available. 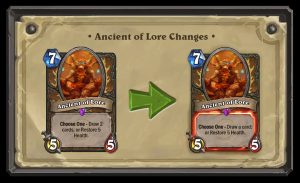 The card changes are the following:

With the changes for these cards players will be able to turn them into dust for their full value, which is a good opportunity to start saving dust to craft cards from the upcoming expansion.