GTA V Online is still extremely popular. Rockstar is perfectly aware of this, so they revealed that the game will receive another multiplier mode. Dubbed “Inch By Inch”, it will launch on April 12. The mode sets two teams of players one against another (duh) on a grass field. They have to carry a package to opponent’s end zone. The catch is that the player who carries the package cannot use any weapon, meaning that teamwork is vital for victory. Although carrier can’t fire, he can use “burst of speed” that can help him staying alive and delivering the package. 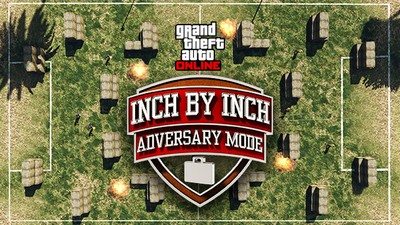 AS Rockstar stated, in Inch By Inch you’ll “claw your way through a hail of bullets to reach your team’s endzone.” It sure sounds very interesting, but the drawback is that not a single gameplay video appeared.

Another new is that double XP weekend is planned for 8-14 April. By playing Adversary modes, you can get double RP and double GTA$. The Adversary modes that are part of the double XP weekend are not named yet, but since the weekend already started you can quickly check them out by entering the game. And for the end, if you’re looking for a new weapon, Ammu-nation will offer discounts ‘till April 14. For the full details, check out the list below.