GTA Online, the multiplayer part of GTA 5 is one of those games which gets regular updates and free DLC content. Rockstar regularly adds new content and items related to real-world holidays and special occasions to the game, including Christmas, Easter, and now Valentine’s Day, too. These updates bring in new clothes, new vehicles, a weapon or two, and occasionally a new game mode, which is often a minor alteration of an existing game mode. 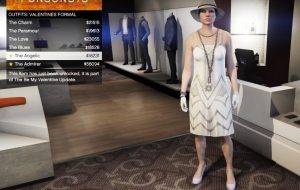 Most of the time, these new additions arrive to the game in the shape of an update early, so data-miners get to know the upcoming events ahead of time. In the case of Be My Valentine, the contents were added in the January 28 update of GTA Online. This particular update adds two vehicles to the game’s roster – the Albany Roosevelt Valor in the Legendary Motorsport shop, and the vehicle released for the Valentine event of 2014, the Albany Roosevelt also makes a comeback. The two cars are mostly the same, but the Valor version sports a few minor visual upgrades and some new customizations.

Players can also dress up for the occasion by purchasing new and old Valentine-themed suits, vests, dresses, bustiers, stockings, masks, jewelry and other similar accessories. These all come in male and female versions, and can be bought in the clothing stores scattered across the game’s world. In addition, the content of 2014’s “Valentine Massacre” also makes a comeback. This also includes clothes too and some new hairstyles, but the most important part of it is the Gusenberg Sweeper machine-gun, available from the Ammu-Nation stores.

Finally, the last part of this update is the new game mode called “Till Death Do Us Part”, which was activated on February 12, and will run for about a week. This mode is a spin on the classic Team Deathmatch.