A modded version of GTA 5 is currently being streamed on Twitch that has one indestructible, teleport-happy deer wandering San Andreas, the setting of GTA 5. This unusual experiment was created by Artist Brent Watanabe, who has programmed the deer. It sounds sedate, but actually makes for a fascinating look at the game’s artificial intelligence as it reacts to the actions of the godlike deer’s traipsing around. 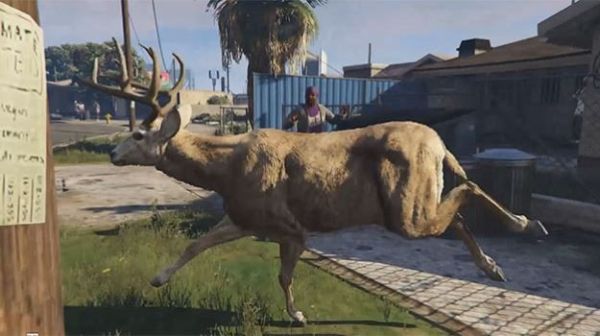 Since being set loose on San Andreas, the deer has been caught in gangster gun battles, invaded a military base and chased by police. When I last watched the official stream, he was being shot at by a helicopter for reasons I cannot begin to fathom. The Twitch stream has been watched by over 200,000 people already.

Talking to the BBC, Watanabe said that the most difficult part of the project was learning to mod GTA V, and then to get the game running for 12-14 hours at a time without crashing. The deer gets teleported to new positions around on the game map to prevent it from getting stuck. Watanabe has been surprised by the popularity of the stream, and explains being drawn to the project by “an odd draw to simply keep watching, to see what the deer is going to do next.” I’ve been mesmerised by the stream myself, so I can’t help but agree.