NaturalVision 2.0 is the result of greatly utilizing ReShade, ENB, VisualSettings and TimeCycle files in combination with the VisualV mod. The goal was to try and make GTA 5 look as photorealistic as possible. Over 400 hours of work was put into Version 2.0, which is a complete overhaul of the original mod.

In regards to minimum or maximum specs: The only thing that matters is how you run currently run GTA 5 without mods and the FPS you’re averaging. Take that and subtract the framerate by 5 or 10, depending on which version you decide to use.

Version 2.0 is a complete overhaul of the entire NaturalVision mod and was built on top of the VisualV time cycle. It is by far the most realistic looking GTAV graphics mod currently out there. There were a lot of changes made and you will notice this as you play. The overall color and lighting in v2.0 is very accurate to Los Angeles in real life.

The ENB and ReShade text is supposed to appear on the top left corner of the screen when you first launch the game. If it doesn’t appear then you didn’t install the .DLL files properly or you still have the old files installed. In the beginning of the readme, it says to remove the old files with the name of each file you need to remove.

There are still some issues. During the day it’s much brighter in first person than third person while in a car. Which removes all the hard work accomplished here. 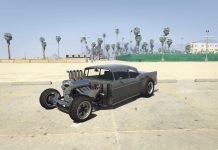