GTA 5’s Online component, GTA Online, has a double cash and RP week going on, and will be sticking around until the 5th of May. This week will also see the release of a new Adversary mode for the game, called In and Out, which will be added on May 3rd. 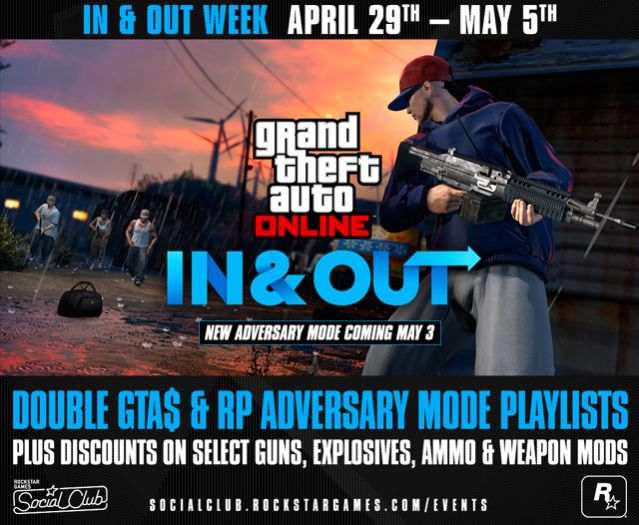 The new mode, In and Out, shares many similarities with the classic Capture the Flag. In it, one team plays as the defenders, while the other plays as the infiltrators. The defenders’ job is to protect eight contraband packages and needless to say, the infiltrators’ role is to steal those packages. As the name of the mode says, get in, and then out.

To get the double cash and RP promised for this week, players have to play on specific playlists. From the 29th to the 30th, it’s Adversary Mode Playlist 1. From May 1st to 2nd, Adversary Mode Playlist 2. From 3rd to 5th, the In and Out Playlist, which features all three maps that currently support In and Out. Additionally, Ammu-Nation will be holding a sale on a bunch of items this week, such as grenades, sticky bombs, assault rifle mods, combat MG and SMG ammo.

Are you going to participate in the double rewards playlists this week? Let us know in the comments below.