Remember Allo, the chatting application released by Google at the last I/O conference. The app launched with a lot of promise and hope to turn the messaging fortunes for the search giant. But, Google Allo didn’t take off as expected and part of the reason was the lack of features compared to rivals. Still, the search giant hasn’t given up and working hard to ensure that all required features are rolled in the service. The latest feature of a web version has been teased by VP of communications products, Nick Fox, giving us an early glimpse at the same. 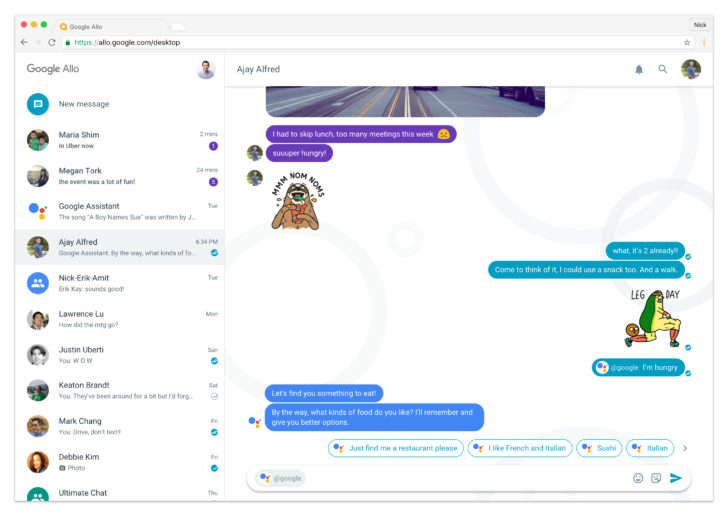 As reported by Fox, above is a screenshot from an early version of the Allo on the web interface. The screenshot appears to be taken from a Mac device on Chrome browser. One can notice many of the features we are accustomed to, like smart replies, stickers, and Assistant. It’s a pretty neat feature to have. For example, WhatsApp on the web has been a huge success. Many professionals and casual users make use of WhatsApp on the PC using this feature only.

Still in early development, but coming to a desktop near you… #GoogleAllo #SneakPeek pic.twitter.com/f7QNFH7IHO

Hence, one can assume it to be a great feature when released. As of now, the app is limited to phones and that too just one device. In case, you happen to switch phones, you are required to start from scratch. No chats are restored on a new device. After the web version, we can hope to have some sort of backup in place to restore messages in future. Also, it will be great if Google can implement multiple Android devices functionality alongside the web variant.

For those who don’t know, Google Allo is a messaging app developed by Google. It includes a virtual assistant and provides a “smart reply” function that allows users to reply to messages with automatic suggestions instead of typing. The app is available on Android and iOS platform.