MobiPicker
News Culture ‘Goblin’: 5 Reasons Why The Show Is A Must-Watch
Share on Facebook
Tweet on Twitter
Deal Alert: 49% Off on ExpressVPN
Touted as #1 VPN in the world, ExpressVPN is now offering 49% off & an additional 3-months of service on its annual plans.

Goblin, also known as Guardian: The Lonely and Great God, is a South Korean television series starring Yook Sung-Jae, Gong Yoo, Lee Dong-Wook, Kim Go-Eun and Yoo In-na. The series has been airing on tVN Fridays and Saturdays since December 2, 2016. The story revolves around an immortal goblin and a grim reaper. Kim Shin (played by Gong Yoo) is an immortal goblin who also happens to be a protector of souls. An amnesiac grim reaper, played by Lee Dong-Wook, lives with Kim Shin. The grim reaper is in charge of taking deceased souls and together, they see the dead off into the afterlife. It so happens that Kim Shin meets a girl, Ji Eun-Tak, played by Kim Go-Eun. With a special ability to see ghosts, Ji Eun-Tak is destined to be his bride and return him to ashes. Just a month after its release, the South Korean drama is already high on popularity and is receiving the positive response from the views.

5 Reasons Why Goblin Is A Must-Watch

There are a good many reasons why you should watch this show. Amazing acting, stunning cinematography, bromance, the soundtrack and most importantly, the gripping story line.

The grim reaper’s character requires putting on some amount of ‘foolishness’ and Lee Dong Wook has enacted the character brilliantly. Playing the character of goblin isn’t easy either. Gong Yoo has done a marvelous job doing the best he can, capturing the history and emotions of the character with his eyes. Many would view immortality as a gift but the way Gong Yoo expresses his emotions when ‘punished’ with immortality will blow your minds away! You must watch this one for the sheer acting skills portrayed by the characters, if not for anything else.

The cinematography is as important as the story line. Without beautiful scenery, without the rustic backgrounds, without the beauty of the nature captured in all its glory, any drama series will sound dull and boring. But Goblin does a fine job when it comes to cinematography. The scenic beauty and the picturesque scenes will leave you wanting for more!

What happens when two guys share the same room? Bromance! Well, Goblin has portrayed the characters and emotions of goblin and the grim reaper really well. The love, hate, fights and the secret admiration they have for each other will make you nostalgic about the wonderful days you spent with your roommates!

Most of the songs have a unique, sad, dark minor tones you will instantly fall in love with. And the best part – the music doesn’t seem to be out of place at all. It gels well with the depth of the characters and goes hand-in-hand with story development. Every happy song has an innate sadness that’s hard to go unnoticed. Once you start watching the series, you will fall in love with almost every soundtrack!

All the above four – soundtrack, cinematography, bromance, and acting – will probably not sound as good without a gripping story line. Though the central theme of the drama series is death, the script captures the fragility of mortality in such a way that you start looking at death from a new perspective. The story is a bound with life lessons such as appreciating everything and everyone in your life, looking at death in ways you have never imagined before and more.

Are you a fan of Goblin already? What do you think about the Korean drama? We’d love to hear from you! 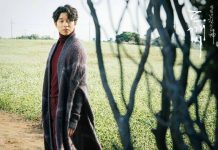