Girl Meets World – the American coming of age television sitcom that made its debut on Disney Channel in June 2014 – is a sequel to Boy Meets world, which aired on ABC during 1993-2000. The story of Girl Meets World revolves around Cory and Topanga Matthews’ daughter Riley Matthews and her best friend Maya Hart as they navigate the challenges of life and school. Rowan Blanchard plays the character of Riley Matthews and Ben Savage plays the character of Cory Matthews. Maya Hart’s character is played by Sabrina Carpenter.

The new episode of Girl Meets World Season 3 will air on January 6th. The episode will focus on Riley and Maya’s friendship. The show’s official Twitter account reveals that Riley has a big wish for her best friend. She wishes Maya to have hope. No other details from upcoming “World Meets Girl” episode have been released. The episode will air for 1 hour on January 6th. On January 13th, episode “Girl Meets Sweet 16” will be aired, which will be followed by “Girl Meets Goodbye” on January 20th. The series airs every Friday at 8:30 pm EST.

The spoiler on twitter reads – “I wish all of you who have grown with us a happy new year. May we begin it with what Riley has wished for Maya – hope”. The new episode will reveal Riley’s big wish for Maya.

In a recent Podcast interview, Rider Strong said that the series has already ended. He said – “We finished the third season of ‘Girl Meets World’ – my brother and I were directing a lot of episodes and I acted in a couple – and the show ended.” But the writers clarified that the statement was taken out of context. Disney Channel hasn’t made any decision so far regarding the show and as such no confirmation regarding the cancellation of the series or its end can be made as of now. 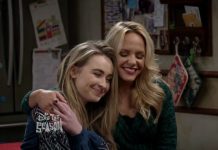