Gionee is sending out press invites in India for its upcoming launch event on 24th November. According to the invite, the company will be launching the Gionee Marathon M5 smartphone in the country. The smartphone was earlier launched in China this year for CNY 2,299 (approx INR 23,000/$360). 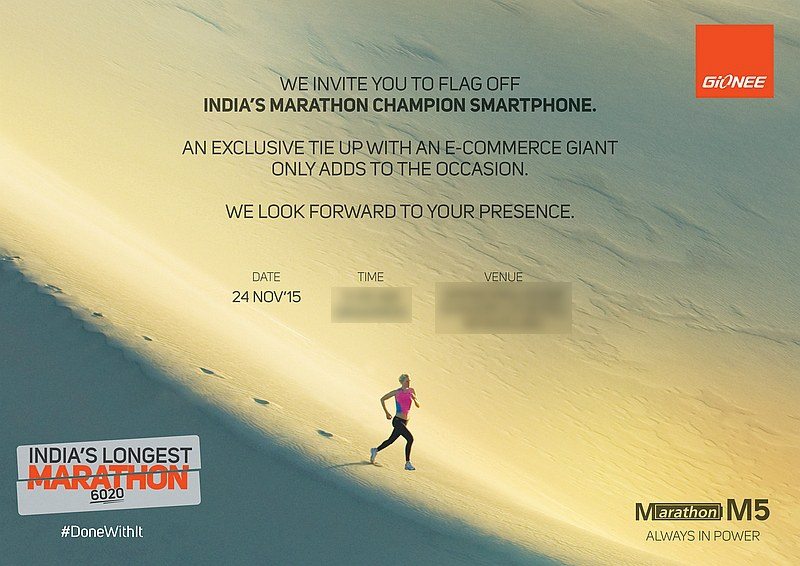 The Marathon M5 is special because it houses two 3010mAh batteries behind its back, thus packing a total powerhouse of 6,020mAh. With such a strong battery, the phone should last at least 3 days on a single charge with normal usage. The phone also comes with an extreme mode that can increase the battery life to 62 hours. A reverse charging feature has also been provided in the phone, which can be used to charge other phones like a power bank. The phone also features fast charging.

Talking about specs, the Gionee Marathon M5 is a dual-SIM dual standby phone and gets Android 5.1 Lollipop pre-installed. It comes with 4G LTE connectivity in both the SIM slots. The phone sports a 5.5-inch HD AMOLED display and gets a 64-bit 1.5GHz MediaTek MT6735 quad-core SoC under the hood. There’s 2GB of RAM and 16GB of internal storage in the phone, which is expanded up to 128GB. A 13MP/5MP camera combo makes up for the phone’s photography apartment.