Some pictures of the yet-to-be-announced Gionee Elife S6 have been leaked. The device is expected for release on November 16, and will probably be wearing a metal build with a gold color. If the images are true, then the handset will feature a 5.5-inch AMOLED display with a 720 x 1280 resolution (HD). It will be powered by the MT6753 SoC from MediaTek, paired with an octa-core 1.3GHz CPU. 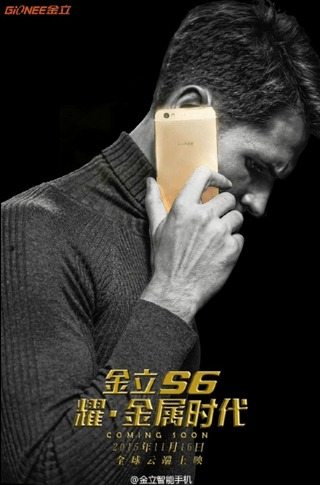 Two variants of the phone are expected. One would contain 2GB of RAM and 16GB of in-built storage, and the second variant – a 3GB of RAM with 32GB of internal storage. As rumored before, the device will sport a 13MP rear camera, and a 5MP on the front for selfies and video chats. The handset will also carry a 3150mAh battery, and will come with Android 5.1 pre-installed.

The Gionee Elife S6 is 6.9mm thin, weighing just 145.2 grams. The expected price should be set at the equivalent of $282 USD, although it’s not certain which variant will have this price. We will know for sure next Monday, when Gionee finally releases the device. Until then, check the pictures below (posted by techgadgetsz), among which there are some teasers that hint that November 16 will be the device’s launch date.