Gionee Elife E8, which was spotted at TENAA last week,  has surfaced with more accurate camera details this time.  The phone will be featuring a 23MP rear camera which has a capability of producing 100MP images. This is somewhat similar technology used for Oppo Find 7 to fabricate 50MP images. 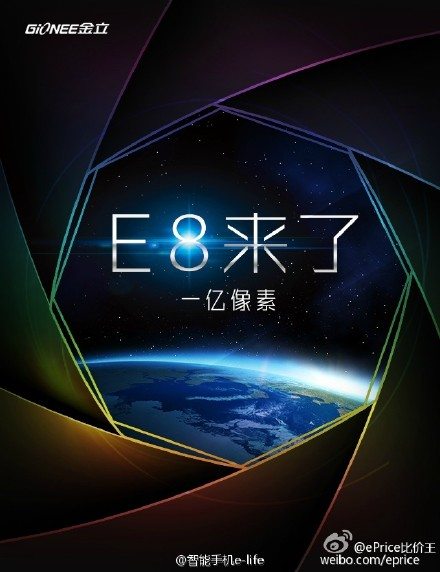 Gionee Elife E8 is powered by a 2GHz octa-core processor, coupled with 3GB RAM and 32 GB onboard storage.  It features fingerprint sensor on the rear just below the camera. It houses a 3,520mAh battery and runs Android 5.0 OS. As Gionee Elife E8 has been certified by TENAA, it will not take much time to get uncover.

According to GFXBench benchmark test in April-2015, phone features a resolution of 1440×2560 on 4.6-inch screen. This results in pixel density of 639ppi as compared to 577ppi of Samsung Galaxy S6. Basis the pixel density, Gionee Elife E8 can set a new record.