Things are going hectic for popular Manga Gintama. After the conclusion of its anime series in March this year, the Manga is all set to come back on TV Tokyo. The production of its Live Action version is also going ahead with the introduction of new cast members.

Gintama is developed by Hideaki Sorachi and the series began in 2004. It is consistently ranked among the best-selling manga in Japan. It entered its final arc in July this year. The plot of the manga takes places in an alternate late Edo period and sees the humanity being attacked by aliens called “Amanto”. It follows the adventures of Gintoki Sakata, who is a samurai. He is assisted by Shinpachi Shimura, who became his apprentice after receiving Sakata’s help in rescuing his sister from aliens.

The announcement about the upcoming anime series was made in Weekly Shonen Jump magazine. It did not provide any other details. The broadcast schedule is likely to be announced in the upcoming issues of the magazine. The manga had received its first anime series back in 2006. It continued till 2013, along with several breaks. The latest series was started in April, 2015.

Gintama is also being produced as live action film. It recently announced the third round of its cast members. The new cast members included are Hirofumi Arai as Nizo Okada, Jiro Sato as Henpeita Takechi and Nanao as Matako Kijima. The main cast members are Shun Oguri, who will play the main lead of Gintoki Sakata while Masaki Suda will feature as Shinpachi Shimura.

The Live Action film is expected to be released in Japan in 2017. Yuichi Fukuda is the director as well as the script writer for the movie. It was reported that filming with Shun Oguri as Gintoki has already been wrapped up. 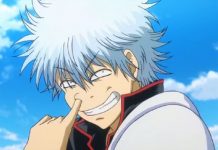 Gintama Dub Is Better Than Most Fans Think