With the arrival of the latest Hearthstone expansion, Whispers of the Old Gods, players have the possibility to to obtain 13 new packs from this expansion. The first 3 packs come from players simply logging in this week as a promotion from the expansion launch. After you log in you get a quest to win 2 matches in the new standard format which gives you 5 new packs. Once you complete that first quest you obtain a second quest which requires you to win 7 matches in the new standard format and rewards you with 5 more packs. 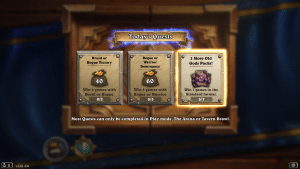 This promotion is really good for both new and veteran players to Hearthstone, as your collection will grow with the newer cards which are all playable in the new standard format. The introduction of the standard format itself is a nod to newer players as they can focus on the newer Hearthstone cards rather than collecting older sets.

Overwatch Uprising Event Is Still LIVE, Blizzard Extended It For Another 24 Hours After It Was Ended Too Early