“Game of Thrones” stars Kit Harington and Rose Leslie looked madly in love as they walked the red carpet at this year’s Olivier Awards. And fans are just overjoyed to see the pair once again together after seeing them last on the screen in Season 4. Check out more details!

The couple first came together on the HBO series, “Game of Thrones.” The Jon Snow of the series even admitted that he fell in love with his co-star in Iceland. But the character of Ygritte died a few seasons earlier and the fans were just dying to see their favorite couple together.

Kit Harington and Rose Leslie made their presence felt with their appearance on the Olivier Awards red carpet. Incidentally, the pair made its red carpet debut at the same awards last year, reports Vanity Fair. So, they were more or less expected to appear this year too.

However, the look of Leslie this year was almost like “kissed by fire” as she rocked a see-through red gown by Christian Dior. The dress revealed her matching bra from CD as well as boxers. Harington too looked his best in a black suit. Rather, both Kit Harington and Rose Leslie looked adorable together.

During their wandering on the red carpet, both Rose and Kit were close to each other and were seen snuggling, giggling and smooching, reports Cosmopolitan. All through the evening they never left each other’s side just like a couple who is madly in love. 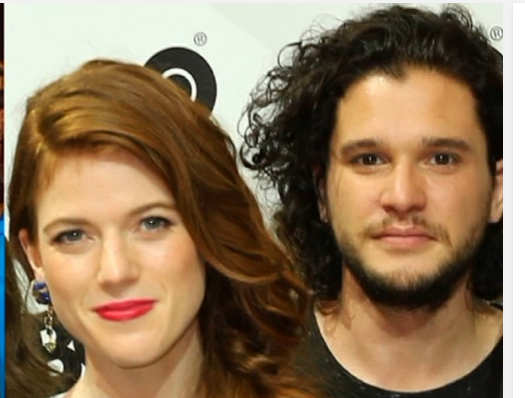 While talking to a media source, Kit previously revealed some details about falling in love with his girlfriend. According to the “Game of Thrones” star, he fell in love with Rose when they were shooting in Iceland for three weeks during the second season. He attributed his romantic mood and falling in love to the beauty of the country.

Kit also said that the Northern Lights in Iceland are magical that made him fall in love. Moreover, he said that if you are already attracted to someone and also playing the love interest of that person then falling in love becomes easier.

As of now, despite not playing the lovebirds on the screen, both Kit Harington and Rose Leslie are very much in love in real life.