We have seen smartphones with curved displays, and there are phones with extremely thin designs. Some have got unique pressure sensitive displays, while others have dual cameras at the back. The smartphone industry is progressing at a very rapid pave and is adopting new technologies constantly. But what’s next? Well, foldable smartphones. 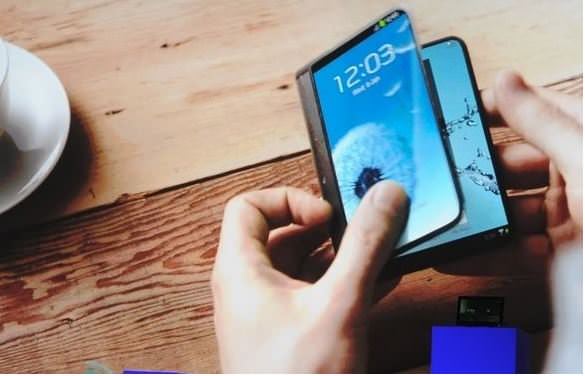 By foldable smartphones, we are not talking about flip phones or phones with two separate displays folded into one using a hinge. We are talking about smartphones with flexible displays that can be folded without damaging the device in any way. As we already know, Samsung is working on the world’s first foldable touchscreen smartphone dubbed as the Samsung Galaxy X. The phone is going to be release next year and will be a major leap in terms of smartphone technology.

According to a report by ChristianDaily, a US patent has been filed recently that suggests that Samsung has got a foldable device that has a fingerprint sensor on it. That device can be folded in half when on standby. Rumors says that the project for the foldable Samsung smartphone has been named as Project Valley. It is being said that there will be two variants of the device, one of them being capable of unfolding into a larger tablet-like device.

Going in line with our recent report, a TechTimes report says that Samsung is going to launch five new flagship smartphones in 2017, including the Galaxy X beside the two Galaxy S flagships and two Galaxy Note flagships. It is being said that the foldable Galaxy X smartphone might carry a 4K display and might be showcased at the MWC 2017 (Mobile World Congress), which is the favourite launch event for Samsung.

Forbes reported that the Galaxy X release date might not be far away. The report cited Gregory Lee, the CEO and President at Samsung Telecommunications America, who dropped some hints about Samsung’s first foldable phone at the Future:Mobile 2016 conference. He said that the Galaxy X is “right around the corner“, and he explained that the delay was caused because mass manufacturing the phone at a reasonable cost was difficult.

According to the latest rumors, The Galaxy X’s foldable display will sport the “diamond PenTile sub-pixel arrangement”. You should know that the intellectual property rights of the PenTile matrix screen are already with Samsung, and the same has been used in the Galaxy S7 smartphones this year. It is being said that the foldable smartphone will be powered by Snapdragon 830 and will be water resistant.

As the device gets closer to its launch, more details will leak out. So stay tuned.