While Samsung is working on the Galaxy Note 6 that is rumored to get launched in August this year, fans of the tech giant are already looking forward to the Galaxy S8. We will also get the Galaxy Note 7 and Galaxy Note 7 Edge the next year. But you might be wondering why are we talking about those phones so early. Well, that’s because some important information regarding the 2017 Samsung flagships has come out. 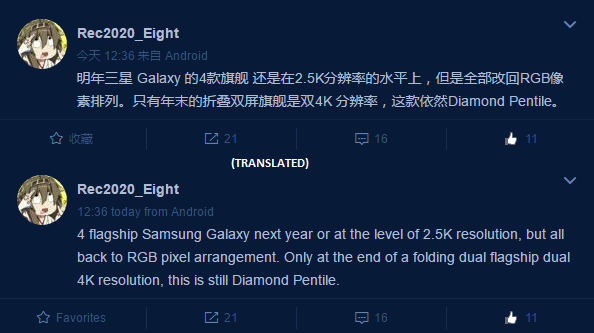 A Weibo leakster going by the username Rec2020_Eight has posted some very exciting information about the flagship phones that Samsung will release next year. Those phones include the Galaxy S8, Galaxy S8 Edge, Galaxy Note 7, Galaxy Note 7 Edge, and lastly, the Galaxy X. So yes, the company will be releasing a total of five flagship smartphones in 2017.

According to the leak, the Galaxy S8 and Galaxy Note 7 along with their Edge variants will be getting an RBG Super AMOLED display with a whopping 2.5K resolution. On the other hand, the Galaxy X is the long-rumored foldable smartphone, and the tipster says that X will be getting a 4K resolution screen with diamond PenTile subpixel arrangement. The Galaxy X is rumored to get a flexible design that will allow the user to fold the phone into half.

Even though this can just be a speculation, we have seen Samsung concentrate more on the display part of its flagships. So this leak does have some authenticity to it. As for the Galaxy X, we need more information, and we are sure something will leak out soon.