The new Samsung Galaxy S7 and Galaxy S7 Edge were unveiled during the Samsung Unpacked 2016 event some days ago, but the launch dates for India were not known at that time. Well, the company has now started sending out press invites for the event in New Delhi, where the S7 and S7 Edge will be launched for the country. The event is scheduled for 8th March, and it is being said that the phones will go on sale in India from 11th March. 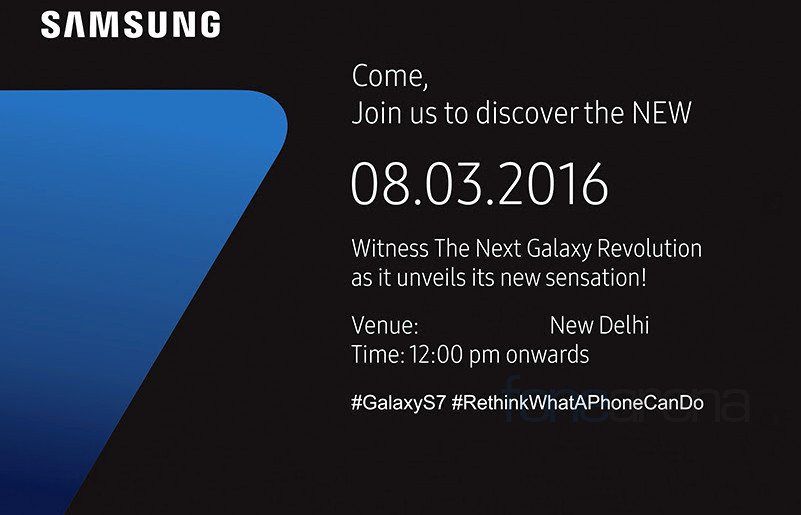 The Samsung Galaxy S7 features a 5.1-inch QHD Super AMOLED screen, and the S7 Edge gets a 5.5-inch curved QHD Super AMOLED display. Both the phones are powered by the Exynos 8890 chipset, except in China and the US, where the phones get the latest Snapdragon 820 SoC. Other specs include 32/64GB internal storage, 4GB RAM, microSD card slot, fingerprint scanner, and IP68 certification (water and dust resistance). The S7 phones come with a 12MP rear camera with dual-pixel PDAF, OIS, 4K recording, and a 5MP front camera.

Providing power to the Galaxy S7 is a 3,000 mAh battery, and the Galaxy S7 Edge naturally gets a larger 3,600 mAh battery. Fast charging and fast wireless charging are also supported. As for the pricing, Economic Times says that the Samsung Galaxy S7 will be priced around the same point as the iPhone 6s in India. So the expected price falls between INR 45,000 – INR 55,000. Stay tuned and we’ll keep updating about the status of the launch.