After a lot of leaks and rumors, we now have a pretty much vague idea of what we should be expecting from Samsung’s next Galaxy Note flagship. We have already seen some renders and schematics, and we also reported yesterday that the Galaxy Note 7 name is confirmed. Today, a new leak has confirmed the firmware that the phablet will come with. 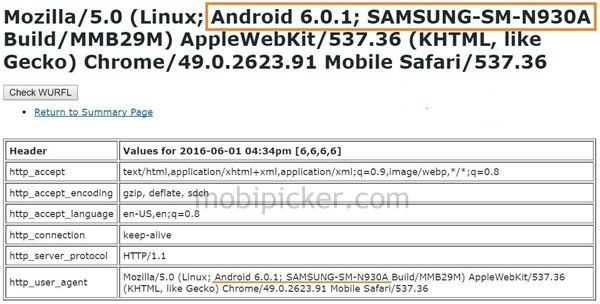 An anonymous tipster has sent us a new image that shows the user agent string of a device. As you can notice at the top, the device is codenamed “SAMSUNG-SM-N930A”, which is possibly an AT&T variant. For those who don’t know, the Galaxy Note 4 carried the codename N910, while the Galaxy Note5 came with N920 codename. So we know that this is the Galaxy Note 7 aka Galaxy Note 6. The image confirms that the device is running on Android 6.0.1 Marshmallow and not Android N.

Earlier rumors had suggested that the Samsung Galaxy Note 7 might be released with Android N out of the box. However, Android N is still in developer preview phase and will take time to release. The firmware development for the Galaxy Note 7 started last month, and the phone is going to be released in August. We don’t think Android N will be ready to be preloaded on the phablet when it launches, which is why we are sure that the phablet will get Android 6.0.1 Marshmallow pre-installed.

Of course, Samsung will update the Note 7 to Android N later on by the end of this year or around the beginning of next year, so fans have nothing to worry about.