MobiPicker
News Galaxy J1 Successor Leaked at FCC, Zauba and GFXBench
Share on Facebook
Tweet on Twitter
Deal Alert: 49% Off on ExpressVPN
Touted as #1 VPN in the world, ExpressVPN is now offering 49% off & an additional 3-months of service on its annual plans.

While all the eyes are on development of the Galaxy S7, the Korean giant is also working on budget and mid-ranged smartphones. As reported by GSMArena, the successor to the Galaxy J1 has been passed through the FCC in the US. The device spotted on the certification website is carrying the model number SM-J120F and SM-J120F/DS for single SIM and dual-SIM variants respectively.

Though the FCC doesn’t reveal specifications of the handset, the website for export and import details in India (Zauba) discloses the display size of 4.5-inch, compared to 4.3-inch of the presently available Galaxy J1. The listing also reveals the price of Rs. 6,686 (approx. $100), but going by the previous records, the price listed on Zauba website is not found correct most of the times.

The Galaxy J1 successor has visited the GFXBench too. According to data stored on the benchmarking website, the handset features a 5-megapixel primary camera, 2-megapixel selfie shooter, and Android 5.1.1 Lollipop OS. It is powered by the quad-core 1.3GHz Exynos 3475 processor, coupled with 1GB of RAM and 4GB of built-in storage. 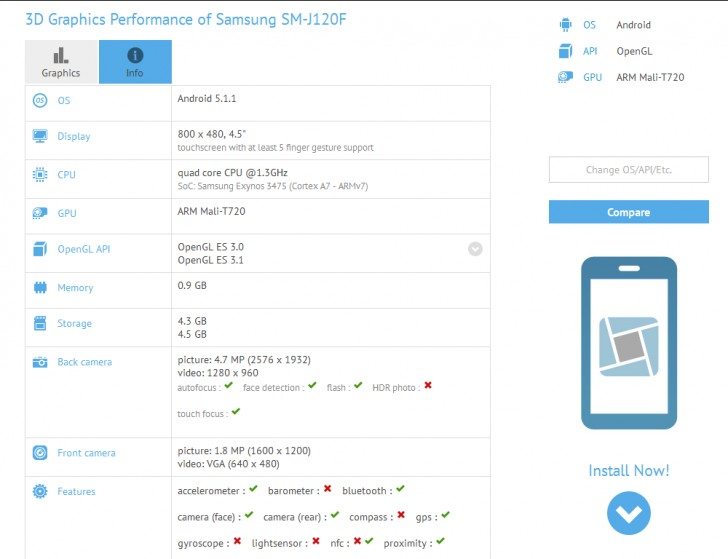 There are no more details available about the release and rest of the specifications. We will keep you updating with upcoming leaks and rumors. Stay tuned.