MobiPicker
News Galaxy A7 (2016) Reveals Exynos 7580 Chipset on AnTuTu
Share on Facebook
Tweet on Twitter
Deal Alert: 49% Off on ExpressVPN
Touted as #1 VPN in the world, ExpressVPN is now offering 49% off & an additional 3-months of service on its annual plans.

Today Galaxy A7 (2016) from Korean giant Samsung has been spotted on AnTuTu which reveals that the device is coming with hardware specifications which will truly rock your mind.

According to the reports received so far, Samsung Galaxy A7 (2016) is powered by Qualcomm’s Snapdragon 615 SoC, however in today’s revelation on AnTuTu, Exynos 7580 will be adorning the upcoming device. With current revelation, it can be presumed that the Samsung Galaxy A7 may come in two variations having different chipsets. 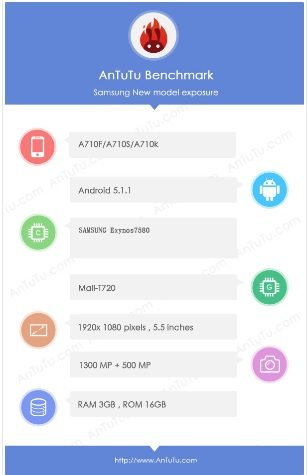 The device spotted today on AnTuTu bears the same model number which was spotted on Bluetooth SIG. 28nm Technology is used for building the chipset with 8 Cortex-A53 cores which were clocked at 1.6GHz. With 3GB of RAM and Mali-T720 MP2 graphics chip are expected to house the device. Exynos 7580 according to benchmark has performed equally well with MediaTek M6752 and Snapdragon 616.

Considering Galaxy A7 and A5 siblings from same family tree of smartphones, it will be interesting to see whether the smaller sibling Galaxy A5 (2016) will receive the same chipset behavior as its big brother. So far, only the Galaxy A5 was housed with an Exynos 7 Octa chipset which is now in talks to be adorning the big brother’s house also.

Since there is lot of haze around the final specifications, we expect it to be cleared in couple of days. Till then keep visiting MobiPicker.