For a while now, rumors have been suggesting that Fujifilm could be coming out with a Medium Format Mirrorless camera. After Hasselblad’s expensive X1D, Fujifilm is expected to bring an affordable alternative. Now, reports claim the new camera by Fujifilm will be launched on the 19th September. This is a great news for those waiting for an affordable digital medium format option.

Fujifilm has already confirmed its presence at Photokina this year, which takes place around same time. The company is expected to showcase its new products the event, including the new Medium Format Mirrorless camera. The rumor was first confirmed by Mirrorlessrumors, later backed by Petapixel here. Now, FujiRumors have confirmed that ‘the Medium Format Fujifilm will indeed be unveiled on September 19’. Fujifilm has a scheduled Press Conference on 19th September (at 05:00 PM Berlin Time – 11:00 AM New York Time).

According to Fuji Rumors, the new camera will sport a DSLR form factor and include a 50 Megapixel Sony sensor. It will be launched with 3 lenses [two prime lenses and one zoom lens]. The expected lenses include a 100-120mm Macro Prime lens, a 50mm Prime lens, and a 20-60 Zoom lens. The new camera is likely to start shipping in 2017. The new Fujifilm Medium Format Mirrorless camera is expected to be cheaper than Hasselblad’s X1D by about $2,000-$3,000.

In June this year, Hasselblad became the first to announce the world’s first mirrorless medium format camera, called the X1D-50c. The Hasselblad X1D is priced at around whopping $9,000, making it impossible choice for most photographers. Even the professional photographers have been waiting for Fujifilm to launch its version. Fujifilm was expected by to be the first to introduce a digital medium format option in the market. It seems the long-rumored Fuji Digital Medium Format System just few weeks away. 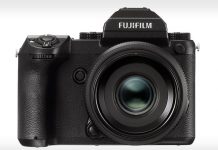