MobiPicker
Mobiles Android Five Tips to Get Bluboo Devices at $9.99 in the Next 24...
Share on Facebook
Tweet on Twitter
Deal Alert: 49% Off on ExpressVPN
Touted as #1 VPN in the world, ExpressVPN is now offering 49% off & an additional 3-months of service on its annual plans.

In case you don’t yet know, smartphone maker Bluboo is holding an anniversary celebration within the next 24 hours. And a part of the celebration is meant for Bluboo fans as well, because all the Bluboo devices will be available for just $9.99 on the company’s official website on 18th June. Starting at 6AM GMT+0 on 18th June, the promotion will last till 1st July. 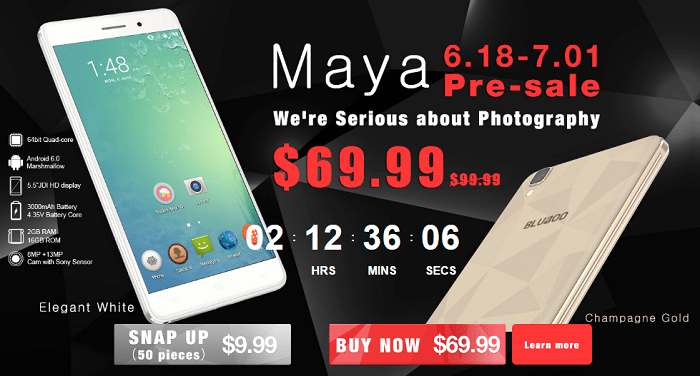 Of course, the stocks will be limited, and you will be lucky enough if you buy a Bluboo smartphone for just $9.99. You can surely increase your chances of landing this special deal by following a few tips. Set an alarm for when the event starts and make sure you have bookmarked the event page.

After the event starts, logos of various online retailers will come up. Just click on any of them and buy the device immediately. Try on other sites if stocks exhaust on one site. You can claim a free “explosion proof” screen guard by posting the screenshot of your purchase on the official site.

The Bluboo Maya smartphone is currently on pre-order and costs only $69.99. It comes with a 5.5”HD JDI display with 2.5D Gorilla Glass 3 on top. It sports a 13MP/8MP camera setup and runs on Android Marshmallow. It gets 2GB RAM and 16GB ROM and is powered by a Quad-Core 1.3Gz processor. The phone has IP63 certification, so its dustproof and water-resistant too. Build with airplane-grade aluminum alloy, the phone is a great budget buy.