Well, it must be that time of the year when Scott Cawthon has to take out another mortgage. Because we just had the release of the latest Five Nights At Freddy’s Sister Location. The series has been made popular by loud and obnoxious jump scares. These rely solely on the marketing of face cam YouTubers. But hold on a minute there because this new Freddys game is definitely a bit different. Well at least in terms of location. Well, anyways, it seems the developer is not done with this game yet because there are major hints of a new update arriving for it soon.

“The game was way too short to be something that was a year in development. So these are my reasons why I think that Sister Location will recieve more updates with more story:

She is main character currently, and she really doesn’t fit into anything. Yes, she is supposedly the one that guides you through the whole game, but is it really her only purpose?

Even though SL is explored pretty much whole, we do miss content in those places:

-Light and Zapping – Not useful for anything but for first 3 levels of story, and to reveal that workers hung themselves.

-Warnings for movements in vents – Only here to warn you that you are going in that vent, and in one night where we hear that something is coming, and that is it. A whole missed opportunity.

When rewatching the trailer, it is obvious that it was created to be tense, to signify action in places I talked about above. But there is no tension whatsoever.

When teasing the game, and in his statements, he said that there are some parts of the game that are too dark, even for him. Other than that, when teasing, it showed a lot of animatronics, in form being ready to attack, and half of them are never seen together.”

You can read the rest of it on Reddit. Let us know your thoughts about the potential Five Nights At Freddy’s Sister Location update in the comments. 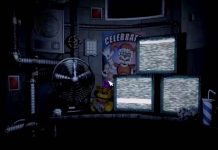 Five Nights At Freddy’s: Sister Location Guide – How To Beat Private Room For The “Fake Ending”