The launch of the third edition of the king of budget-friendly handsets is just around the corner and with it the Moto G 2015 leaks become abundant too. Just a couple of days ago, we got our hands on the device’s first renders. Today, courtesy to an insider’s tweet,we have an actual image of the handset’s prototype. 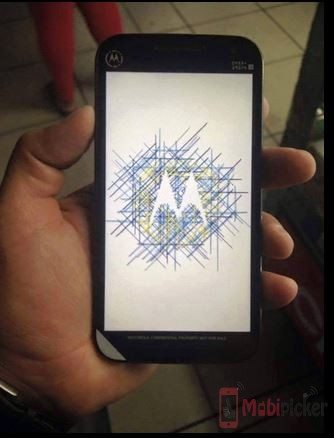 The device revealed features a metal plate on the rear with a patterned back cover for grip. Also visible is a 5” 720p display with front-facing speakers. But the hardware is not all that has been leaked as the leaker ventured into the system information menu to prove that the device in the images is infact the Moto G 2015.

The smartphone is an LTE version with internal coding XT1542 powered by a 64-bit Snapdragon 410 which many low-end devices use at the moment. The device’s RAM is rumored to vary from 1GB to 2GB with the LTE version expected to feature the greater amount. The biggest update for the third generation of the Moto G is for the camera which has been upgraded to 13MP for the main camera supported by a dual LED flash and a 5MP front shooter as we had reported earlier a while ago.

We hope that the device is released soon and despite the leaks in all its glory.