It appears Todd was lying to us when he said Fallout 4 Nuka World will be the last DLC. A site called SteamDB shows an unknown expansion in the DLC tab of Fallout 4. From the looks of it, the new update was introduced 2 days ago. For those who are unaware, SteamDB is a website that allows you to view stuff on Steam in more detail. All the information is displayed in a visible manner. Each game on Steam has a place on STeamDB and that, of course, includes Fallout 4.

Go to the Fallout 4 SteamDB page and you will see “2 days ago” in front of the last record update tab. Then click on the DLC tab and it will reveal an unknown tab, with its own SteamID, appearing. At the moment it simply reads “SteamDB unknown app 540810”. In the Last Updated column for this, you can see “2 days ago” written for this unknown app.

So, could this be a new expansion for Fallout 4? Most probably because otherwise why would it appear in the DLC tab? At the moment we can’t tell what this new DLC will be called or where it will take place. However, we have some suggestions. It could be a new Gun Runners Arsenal DLC. Those who played New Vegas and all its DLC would remember it. Basically, that DLC added new guns and mods to the game. However, the weapon modding system is too detailed and diverse already to be worthy of getting new mods. So, it’s highly unlikely we’d get DLC that simply adds new weapon and/ or mods to the game.

A more radical thought is Fallout 4 VR. Todd has repeatedly stressed how he wants to bring virtual reality to the game. So, could this new DLC be just that? Well, we’ll just have to wait and see. For now we know for sure that Fallout 4 Nuka World DLC wasn’t the last one after all. 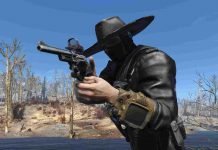 Fallout 4 Nuka World Secret Revolver Discovered After Update 1.7 – Here’s How To Get It